In addition to field projects supported across range countries PICA has developed a number of new research projects both in-situ and ex-situ that are allowing us to explore new avenues for enhancing our knowledge, engagement and techniques that will help further our long term conservation efforts.

Having the support of project partners not only increases the capacity of PICA but can also provide access to new resources that otherwise would be unavailable. One of the greatest resources that PICA has available, as a result of the partnership with Snow Leopard Trust, is access to their long-term Snow leopard camera trapping image database carried out across numerous Central Asian countries. With Snow leopard and Pallas’s cat sharing much of the same habitat and range these images can be a quick and valuable resource to identify Pallas’s cat presence, activity patterns and association with other species. In some-ways the work being done to protect and monitor Snow leopards is, indirectly, improving our understanding of the Pallas’s cat.

Previous research carried out by PICA staff at RZSS Highland Wildlife Park studied and analysed captive Pallas’s cat vocalisations through the breeding season with the aim of using the data to help adapt breeding management techniques. Using these vocalisations as auditory “lures” PICA staff have supported two MSC students who conducted captive trails testing them against others (olfactory) lures including catnip, valerian oil. These trails were undertaken as a precursor for field testing in a Pallas’s cat range country where their presence was known. In 2018 the PICA team joined forces with the Snow Leopard Trust field team in Kyrgyzstan to test these lures alongside a camera trapping survey to explore the possibility of improving the capture success of Pallas’s cats and other small carnivores. As a small secretive and elusive cat, it is no surprise that Pallas’s cats have a low detection rate during field surveys whether the monitoring technique is camera trapping, snow tracking or visual observations. Field research techniques that could improve capture rate could be a valuable tool for future monitoring surveys. See the full report of the Kyrgyzstan field research below.

For many of the small felids, including Pallas’s cat, detailed knowledge on the range of threats, trend in threats or to what extend threats are having on local populations, is often very limited. Such a lack of knowledge can have a negative impact on implementing effective conservation action. With species that have an extensive range, like the Pallas’s cat, it is also likely that there will be a variety of threats dependent on what part of the range you look at. Obtaining such accurate data is, as a result, a big challenge for conservation projects as it can often be linked to the local knowledge, or lack of, toward the target species. PICA has been delivering activities focused on collecting data from across the species range using standardised threat surveys. These surveys are also being used to gather data on the general knowledge of the species which in turn supports the design and distribution of the educational materials. PICA surveys were translated into several range country languages and distributed by range country researchers as well as an MSc student, sponsored by PICA, from the National University of Mongolia.

To date PICA has compiled results from over 400 completed surveys conducted across 5 range countries (Mongolia, Pakistan, Uzbekistan, Kyrgyzstan and Nepal). “Researchers” surveys were completed by the range country researchers to collect data on what was considered “expert knowledge” and to be used as a comparative tool against local knowledge. “Herder” surveys were used within villages and communities living alongside suspected or known Pallas’s habitats and collected data from local knowledge.

Data from this work has been used in the recent Pallas’s cat IUCN Status review and is, to date, one of the most comprehensive standardised studies on Pallas’s cat threats across range countries. See below for the full project report.

These surveys have been translated for use in several languages and are freely downloadable here for use with any field expedition or study.

With a database of over 500,000 images analysing them is clearly more than a one-person job. To assist with the screening, recording and analysis of the data PICA has received support from several volunteers from partner organisations and from a number of students, who in turn, have used data for BSc and MSc thesis’. In addition to the team of volunteers and students PICA has also collaborated with the Zoological Society of London with one of their Senior Wildlife Biologists providing technical assistance and training to the PICA team for use with the camera trap analysis tool.

Using the camera trap analysis tool PICA, with support from the project volunteers / students, have been able to input a selection of data from Snow leopard field surveys conducted in the Tost mountains, Mongolia. Camera trapping data sets from 2012, 2013 & 2015 were used to compile new information on Pallas’s cat activity patterns and how this is, or could be, effected by the presence of potential prey species (e.g. pika, rodents, marmots) or by the presence of potential predators (e.g. Snow leopards, wolves, red fox, domestic dogs). Results from this study indicated that Pallas’s cat daily activity patterns align most with the pika, which is recorded as being their main food source. However, the diurnal activity pattern (with crepuscular and nocturnal tendencies) did also place Pallas’s cats at risk from domestic dogs who activity pattern was similar. The data suggests that that the behaviour of the Pallas’s cat is more likely governed by the activity and abundance of prey species (primarily the pika) as opposed to potential predator species. Further data will be added to this study to ensure more robust results and conclusions can be drawn.

See below for the full project report. 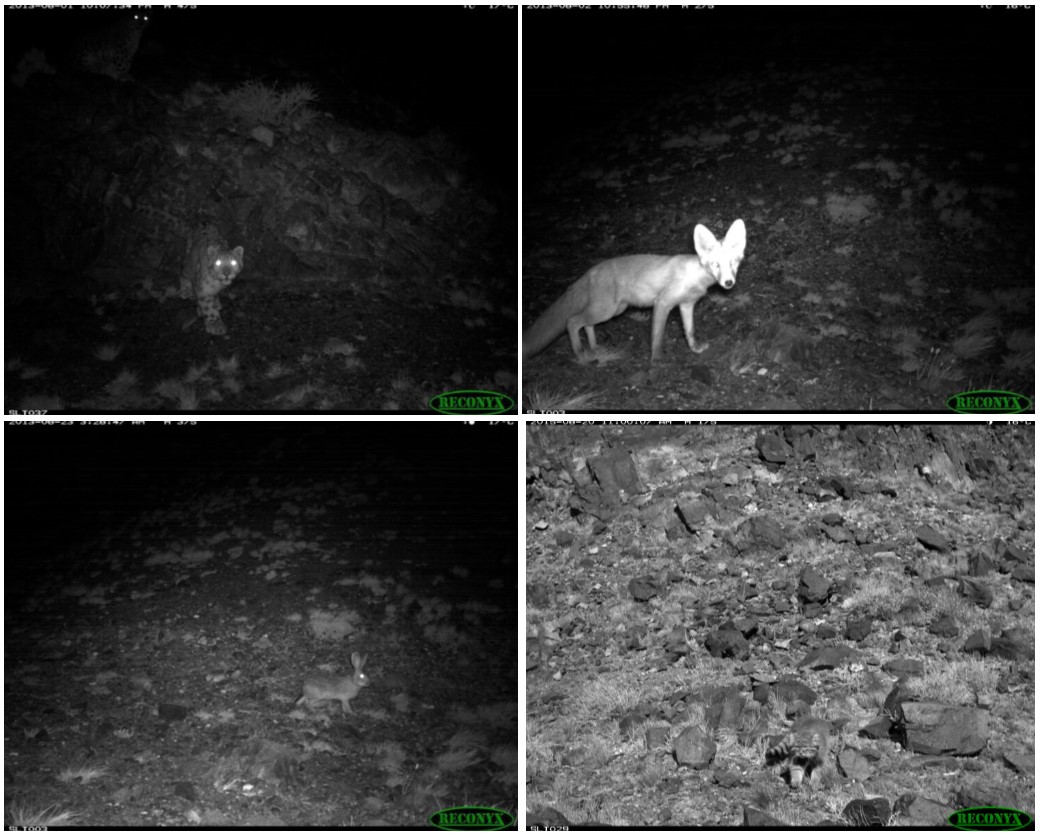 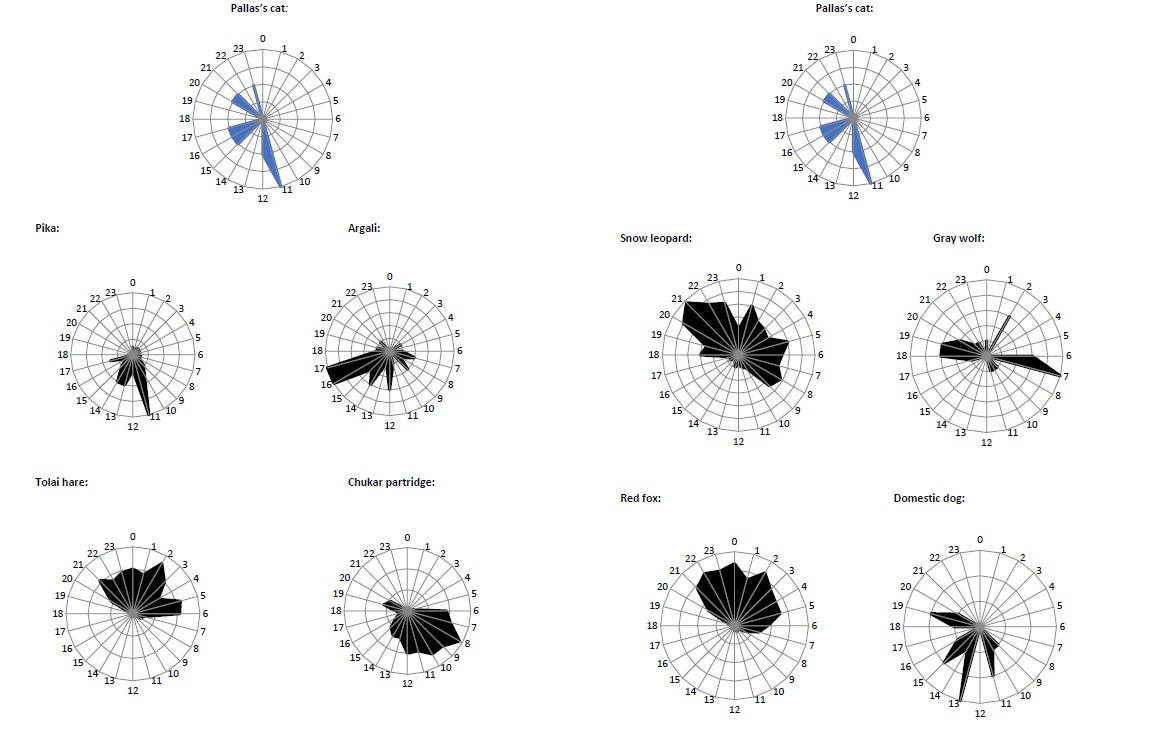 An important objective for PICA is to educate people and raise awareness of the species with a particular focus on range countries. It is important however that we make efforts to understand the existing knowledge or rather lack of knowledge of local people toward the species and make efforts to understand any change in attitude or knowledge over time following the distribution of any educational materials. To do this PICA has sponsored an MSc student from the National University of Mongolia who has conducted repeated targeted field surveys in known Pallas’s cat locations in the South Gobi. Her MSc thesis titled “Developing Community awareness of Pallas’s cat in Mongolia” has focused on attitudes, current knowledge, access to information, threats and awareness of Pallas’s cats and the role they play in the surrounding environment. Following two field trips (2017 & 2018) to South Gobi and survey completion from the same households interviewed each year a total of 96 (repeated) surveys were included in the data. Following the 1st year (2017) surveys participants were each left with the PICA educational poster, leaflet and pocket guide, giving an opportunity for them to learn more about the species prior to the surveys conducted the following year.

Data from this study has, for possibly the first time, allowed a detailed evaluation of the impact of educational material in relation to local knowledge. Results shows an increase in identification of Pallas’s cat (45% to 68 %) and in the understanding of what constitutes as a threat (47% to 71%), one year after the educational material was delivered. Another significant result was a large increase in the appreciation of the Pallas cat with the more people saying the species is important to them (48% to 84%).

These results highlight the importance of targeted educational campaigns. This study has been the first to evaluate the impact of educational material using a standardised methodology and could be a positive “model” for other projects.